Primo Ramdisk and PrimoCache are two software programs which both can utilize physical memory to speed up file access and improve overall system performance. However, they are two different types of software, with different application fields and focuses. Compared with the two, they have their own advantages and disadvantages. In addition, they are independent of each other, and you can install both, or just one, as needed. 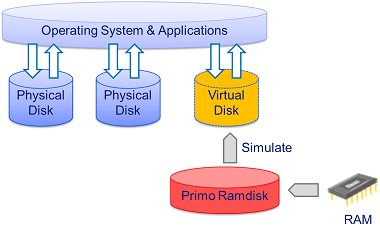 PrimoCache is a caching software program whose core function is to use high-speed devices such as memory as a cache to accelerate physical hard drives. It intercepts the read and write requests sent by Windows to the hard disk, and optimizes the processing to achieve the effect of acceleration. For Windows read requests, if the requested data is already in the cache, it can be read directly from the cache without accessing the low-speed hard disk. For Windows write requests, it can first write the requested data to the cache to complete the request, and then slowly write it to the hard disk from the cache in the background.

Here we give a simple example to illustrate the difference between Primo Ramdisk and PrimoCache in usage scenarios. For example, the goal is to improve the startup speed of  frequently used software. One method is to directly install these software on a ramdisk created by Primo Ramdisk. The ramdisk shall enable the backing image file. When the computer boots up, Primo Ramdisk loads the image file containing these software onto the ramdisk. Thus, these software are ready to run completely in memory, which will show a very fast startup and running speed. Of course, the Windows boot time will be longer because of reading the image file. This method can provide the best performance. However, if you have installed these software on the hard disk and do not want to make changes, or the computer does not have the memory to create a ramdisk large enough to install these software, or you do not want the system boot time affected, then Primo Ramdisk is not suitable and PrimoCache will be a better choice.